Its about time for me to blog again – since its been quite some time.
Recently – I spent two weeks living in an air b’nb in New York city in midtown on the east side and it was a wonderful experience in a great neighborhood. We did all the touristy things- we took the day tour and the night tour on the Big Bus – we got tickets at TKTS to see Jersey Boys (Dominick – who plays Franki Valli – met us after the show and we got to see the inside of the theatre from the stage, downstairs (the dressing rooms – and where the band plays) and backstage . That was amazing.  We walked a lot – we ubered a lot – we took a dinner cruise around the statue of Liberty – we ate at lots of different places and then at night – we went back to OUR apartment. After being there a week – it already felt like our neighborhood and returning there at night actually started to feel like home.  It was a really big air B n B  – a little funky because it smelled like smoke but was otherwise it was great – location – and convenience wise – and pretty darn large for NYC – size wise.  It also had an enclosed courtyard with high ivy walls all around it for a back yard – and I even got to work outside there in that courtyard for a few days – which was really nice. There were lots of traffic sounds but the weather was perfect.
After New York – I came home for a few days – got to hang out with my daughters – then flew to Seattle for PAX WEST – a trade show that is part video games and part tabletop games.  We were in room 309 – right off the escalators – which was a different location and an entirely different feel because we were not on the show floor for a change and we all really liked it.
We shared a room with Exploding Kittens – who had signings by artists Elan Lee and Matthew Inman (who runs the funniest website ever –  theoatmeal.com) – if you have not seen it – you should check it out. He’s got a great piece on happiness which I could personally relate to.
We featured a game called Suddenly Drunk – and Skaidris Gunsmith (the author of the game Suddenly Drunk) came all the way from Australia to demo his game with us. THE KLASK crew came in from Denmark, Razlo Bailey of  Billionaire Banshee fame came from New Hampshire – Peter Vaughan of Letter Tycoon flew in from LA, Blaise Sewell of Poop was there from SanDiego and the games Circular Reasoning – Boomtown Bandits – Convert – Jack Attack – Match Plus and GAME OF 49 were available to demo in the free play room right next door.  Ike from New Zealand came to show us some new properties he and his partner Johnny Fraser-Allen from Troubadour Games are working on – and we are excited to be working with these 2 very talented guys.
Seattle was a blast to hang out in- we had some really great dinners – and because my good friend Cher (author of our upcoming game HOKEY POKER) lives in a high rise in Seattle – each night we had the greatest view – champagne drinks and conversation – and a really nice time. She makes a mean chicken soup too as an added bonus.
We walked around the city – at night  – the weather was perfect – and we generally enjoyed the cool weather (except for the people from LA who were all freezing).  This was the first time I wasn’t the one complaining about being cold!
People from everywhere came by the room and I actually missed many of them three or four times because so much was going on!  Next year I really have to do regular hours in the room. 🙂
I loved the mints in Seattle 🙂 – and I enjoyed the seafood – the CAH panel in the giant theatre Benaroya Hall was incredibly funny –  and – of course – nothing beats trying out new games and meeting new people.
Pax West was definitely one of my very favorite cons of 2016 so far – and I feel like the whole Breaking Games – Ad Magic team walked away from PAX with a new perspective
Thanks to @trinandtonic of Cards Against Humanity for inviting me on her very professional panel eintitled  “Make your tabletop game like a damn professional”!  It was very educational – and Trin runs panels like a damn professional moderator!!
While our team was in Seattle, the new Bloomberg Business Week came out and Ad Magic was featured in an article on manufacturing on Page 44 of the magazine dated Sept. 5-11.   Of course the article is on the internet too – which is great and surreal all by itself – but somehow seeing it in print really brought the immensity of that article home.  Even Steve Jackson of Munchkin fame and MANY OTHER GAMES  (he is a legend basically in this industry) emailed me to congratulate me. It is a great 15 seconds of fame all around. Thank you to Cards Against Humanity for making that happen. 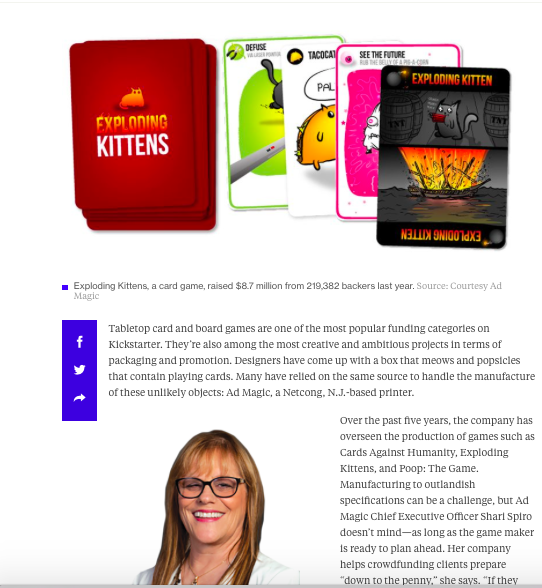 Right now I am writing this from in an airport in Milwaukee and I should be home late tonight.  People ask me how I handle the traveling.  I take a TON of vitamins – lots of tinctures – I use herbal remedies and herbal oils and I wash my hands A LOT!   Being on the road you have to take really good care of yourself and watch everything you eat – and touch and do.  I have blogged about this in the past – and I am still holding up pretty well LOL.
Seattle was cool – high 50’s -60s – Wisconsin on the other hand was a hot and humid 90. No idea what New Jersey will be like.
I am so looking forward to getting back home. I really miss my family – which is the main downside of going to the shows – but we are planning to have a nice weekend together and spend some quality time.
I have to tell you –  I only have about 6 emails right now- (which is amazingly low) and I have done a really decent job of keeping up with them. Of course that might have something to do with the 6 hours I just spent in this airport with nothing else to do but answer emails.
The Next show is Essen Germany,  Essen Game Fair, which reminds me – I need to learn some useful German words 🙂
If any one has any suggestions for a way to learn German fast – please send them to me @ad_magic on twitter.

Great blog! Loved reading about all of your exciting activities. I've got to get out more!