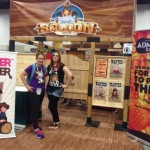 Two cow girls from the team – Kat and Yvonne 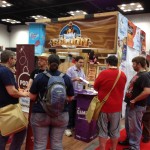 Gen Con this year was an amazing ride!! From planning which games were going to trying to alot booth space for them, arranging rooms for some of our designers to having giant 10 people dinners (with the greatest local IPA’s in Indy) it was an up at 7 in at 11 daily adventure.
Planning it was something different this year because Brian – my partner and the most talented builder ever – decided to build us a wooden and metal saloon to house the games Boomtown Bandits – by Isaac Epps and Slap 45 by Joe Sklover and Max Temkin. The saloon was constructed of cedar in such a way that it can be assembled and disassembled for our use again in Essen Germany – where we plan to ship it in a few days. To say the saloon was a hit was an understatement! 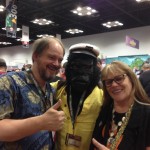 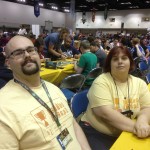 I also had this idea – after I saw his geek a week decks – to hire Len Peralta to draw the wanted posters of some famous and less famous designers – and one female manufacturer LOL – to decorate the walls of the saloon. In addition we used the art style from Boomtown to construct giant 10 x 10 banners which actually became the graphic interior of a saloon – from tables to bar – down to the last details added by Peter Vaughn – of labels on the bar bottles that have special references to games and to Ad Magic / Breaking Games. My crack graphics team (not to be confused with a graphics team on crack) made us the best Window Clings – for our games – which were on the doors on Maryland Ave – and somewhere else that I never actually got to see – and ads for the back of the Beginners Guide to Gen Con and a Giant Ad in the Gen Con book. Next time we are doing a coupon in the coupon book too -but this time we gave away a $600 iPad and the girl who won it – turns out she REALLY needed a new one. We also gave out $75 and $25 iTunes cards to second and third place winners. The idea was that the more people tried our games – the more entries actually went into the drawing. It worked out well and we gathered a few hundred new email names, and hopefully these are people who are actually interested in our line of Breaking Games.

The best part was having all of the designers at the special tables we make for them – Jeff Johnston of MoonQuake Escape gave out a ton of moon pies – Blaise Sewell – a lot of poop was distributed – Raz Bailey played Billionaire Banshee even with people who were NOT actually single – Circular Reasoning was a bit of a hit – Letter Tycoon – placed 18 out of 400 games on the Gen Con BGG ranking chart and Boomtown Bandits snuck in at 43 I think it was. I actually screamed like a little kid when I saw Letter Tycoon at 18. Silly girl. We also had our Hogger Logger guys in their red and black plaid, Twirk the game was demoed by JR Honeycutt – all in purple to match his game – Our Fun Employed guys demoing their funny game – Frank – from Mr Game who has a game that even the Looneys – the inventors of FLUXX – loved when they played it as a demo back in its inception – and Game of 49 with Mark Corsey and Ruth – trying to get the Universe to change the secret of life from 42 to 49 where it rightfully belongs!!! Gothic Doctor with Doug was a huge Success – Infamous the Pirate Wars with Dan Blanchett demoed to sold out crowds in the demo hall – and I head that I even sold a few of my cupcake decks !! LOL _ I love those pictures of cupcakes. We even sold Amberden Affair – they had a live party again – and we have decided to bring that to Europe with us as it truly is a Euro game. Oh – and we even had JENGA GIANT at our booth!! My friend Robert has that game and we thought it would be fun. We totally sold out of those – Letter Tycoon – Boomtown Bandits and some others. We had a Letter Tycoon National Tournament and handed out a giant trophy – and I met Mike Gray – who used to run inventor relations at Hasbro and that was a true highlight of the con for me. He came to see the booth and I was honored to meet him – I even got to introduce Max Temkin to him – who was also pretty happy to meet him. Celebrities did not stop there – I even got to see James Ernest (of course I got him to come by after telling him there was a wanted poster with his face on it at our booth 🙂 Yes those wanted posters were quite the hit – Thanks Len! 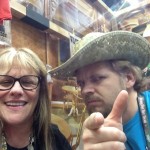 Shari and A cowboy 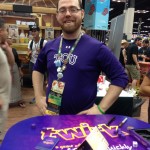 JR Honeycutt and his Breaking Games title Twirk – not TWERK 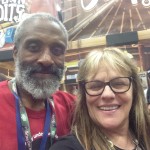 We all had a TREMENDOUS time laughing at Concert Against Humanity where I saw all my favs – the Double-clicks and Paul and Storm – and Molly Lewis – who is an amazingly funny performer I just discovered there. That was fun – I had backstage passes and got to wander around and meet the kind of famous Pakistani Comedian Kumail Nanijani – (who I had my picture taken with of course like a rabid fan). Then we grabbed our balcony seats and had our own little group up there where we proceeded to literally laugh our butts off – it was so funny and I enjoyed it so very much that I seriously think it was the best bang for the buck I ever had from any concert EVER – (except I really did love Taylor Swift couple of weeks ago too). Just being honest.

Shari and Jeff from MoonQuake Escape 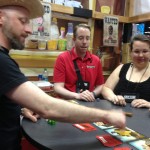 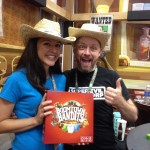 I met a TON TON TON of new designers with new games – and I even got a little but drunk with a couple of industry colleagues (who are also sometimes called competitors in other industries but in this industry we are so happy and feel so fortunate to be doing this we can actually drink together and hang out – which is why I love it so very much.)
We stayed at a little hotel out side the middle of Indy – which was great – as when you pushed the button for the elevator – IT ACTUALLY CAME RIGHT AWAY!! Loved that! and in general cab rides are like 8 dollars in Indy – so what a great bargain that city is. We walked a bit too – and in general we had a great time.

The load in was awful – unbearably hot and long – and the load out – we were there until 9:30 pm waiting 4.5 hours for them to let our truck out – and we had dinner super late and were all beat beyond words- so loading in and out was tough. But the rest of the show was really great. 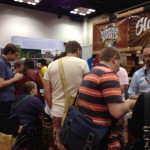 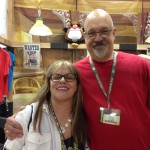 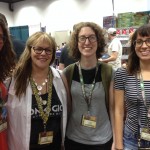 Shari and some of the fine ladies of CAH

FunEmployed had a cool party in a suite in the Hilton – Max Temkin had a cool party in a suite at one of the hotels too – and I got to play a lot of games – which I am so happy about. I had a nice time with everyone – hung out as much as I could – spoke to as many designers as possible – saw as many friends as I could – crammed as many designers in to the booth to demo their games as I could – and in general Gen Con was an over the top success for both our company and for me personally – I had a blast!

Thanks Sugar - when are you going to let me print Scrummy? I am ready.

Hi Shari......Congratulations on ALL your accomplishments. I am glad to see you doing so well. Enjoy your blessings. God is good,ALL THE TIME! Ms. Sugar :-)