Why You Want Someone ELSE to Get Your Game in Retail

Well, its been a while since I wrote in here but I was suddenly inspired to write today as I hit yet another small roadblock in the world of retail.

When I started Breaking Games and became a publisher, I had no real idea what “publishing” was. In the beginning I asked my friends and associates who were publishers “what is publishing?” They said “stick to printing, you don’t want to be a publisher.” And yet like with so many things, my clients NEEDED me to become a publisher. My clients needs have been the driving force behind my entire career from the beginning. I am not sure how other people grow businesses but mine have always been driven by the actual needs of the people I do business with. When a client wanted a website, I learned to build websites. I hated it and I think that I wasn’t really great at it, but I learned SEO and their sites brought them business and made them money. When my clients wanted to make games, I started to make games, and as they wanted more and more complicated things, I made more and more complicated things. THEN CAME RETAIL.

Letter Tycoon was the first to go into retail in Marbles The Brain Store and I finally got to see it in an actual Marbles store last month and it was awesome. Here are two videos of that experience.

The Marbles experience was a good one, not too terribly difficult and we got it done. Somehow I think that it may have left me somewhat unprepared for what was to come. 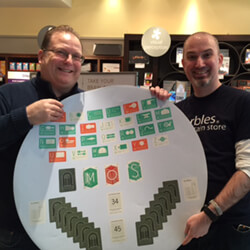 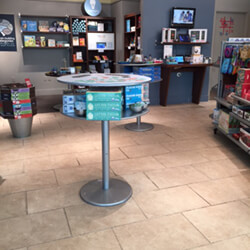 The Game of 49 was the first one to get picked up by a major US retailer – TARGET. TARGET also eventually took Game of Phones and Poop in a Bag. All three are coming out this summer but THE GAME OF 49 came out the second week of June – go out to your TARGET STORE and buy it!  Support an indie game that went all the way from Kickstarter to the shelves of nearly 2000 local Targets – not an easy task by any measure. 🙂   When it was actually on shelves, and I walkedinto a Target store and SAW it there on the shelf – no on en END CAP – that is the thing at the end of each aisle, a prestige spot and one I cannot believe we have attained). Of course, I COULD NOT BELIEVE IT, at least not until I saw it because it has been such a major goal for so very long it was hard to believe it was finally happening. Author Mark Corsey was similarly in disbelief. I could not wait until he saw his game on the shelves in Target. He took pictures – I took pictures – we were like little kids in a candy shop.  So happy – now it needs to sell.

Why is it STILL so hard to believe? Because the system was so very hard to navigate. Anyone who thinks Congress and the House of Representatives is tough has never navigated the Target system. It is a brilliant system, but one of the most difficult ever created.

But guess what, it turns out that ALL the major retailers have systems that are hard to learn! It turns out, that BREAKING GAMES is one of the only companies that has actually undertaken the task OF LEARNING THE SYSTEM, instead of hiring an outside consultant to do it for us. I wanted US to know the system and in so doing I created a new full time job for one of my team. Infact, we had to fly out for training. I went along as I need to have an idea of how the system works too, and it is one complicated animal. Now I am learning the Urban Outfitters system, and SURPRISE! All of my individual games have to be relabeled before they can be delivered or I can get CHARGED BACK. My vocabulary is still actually in the process of growing here and definitions are a little hazy, but all I really know about the word CHARGE BACK (or make that two words) is that I DON’T WANT IT. So now, after packing thousands of games, I have to take them and unpack them and relabel them, and you know what? This is still easier than putting cards into Ice Pops.

But it is not for everyone. Fortunately it IS for me, because the excitement of being able to go into a retail store and see games I have manufactured on the shelves, outweighs the complexities, numerous help lines, discussions, coercing, negotiating, learning, relearning, frustrations and challenges that come with the job.

AND FINALLY as my publisher friend said, stick with the job you have.

You probably don’t really want this one. It might be just a little too much for you to handle.